MultiChoice Nigeria on Monday said the winner of BBNaija Season 5 will go home with a whopping N85million grand prize. 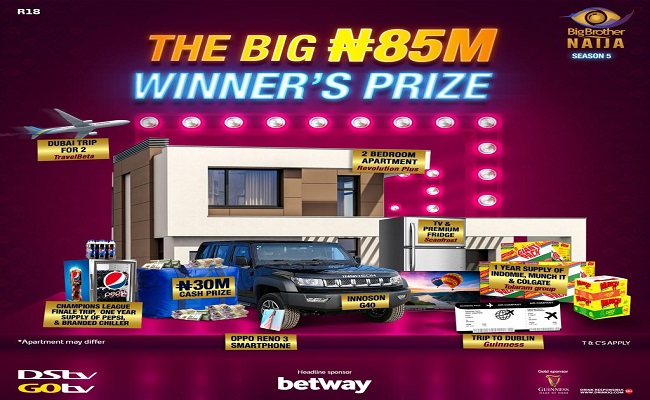 MultiChoice Nigeria on Monday said the winner of BBNaija Season 5 will go home with a whopping N85million grand prize.

This is coming as countdown to the season five premiere of Africa’s popular reality TV show, Big Brother Naija kicked off.

According to the show’s organisers, the grand prize includes a N30million cash prize – the biggest since the show’s debut in 2006.

“We are making this season significant by not only increasing the winnings, but by also implementing other creative and innovative ways to ensure the show lives up to the premium entertainment especially during the current pandemic.”

The breakdown of the grand prize for BBNaija Season 5 includes:

In addition, viewers and fans of the show should expect some surprises in the coming days, MultiChoice stated in a release.

It added that BBNaija season 5 would be broadcast live and 24/7 on DStv channel 198 and GOtv Max and Jolli packages on channel 29, noting that DStv viewers can also follow the drama with the DStv Now app on a smartphone, tablet or laptop.

This new season, sponsored majorly by Betway and Guinness, is expected to air from this (coming) Sunday.