The Ooni of Ife, Oba Adeyeye Ogunwusi, Ojaja 11, on Saturday celebrated this year’s Olojo Festival amidst pomp and pageantry. 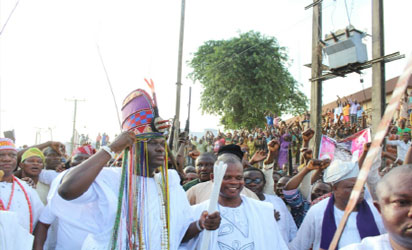 The Ooni of Ife, Oba Adeyeye Ogunwusi, Ojaja 11, on Saturday celebrated this year’s Olojo Festival amidst pomp and pageantry.

The News Agency of Nigeria (NAN) reports that Oba Ogunwusi emerged from his seven days of seclusion in all-white apparel to receive people from home and Diaspora who paid homage to him.

Cultural dancers and worshippers from neighbouring towns also sang and danced to make the event colourful.

The Ooni, decked with Aare crown, amidst prayers and several gunshots, began the journey to Oke- Mogun and Idi-Aje, where rituals and prayers were said for the peace of Nigeria and the Yoruba race.

Olojo festival, which holds annually, is a major cultural celebration in Ile-Ife to mark the creation of the universe and “Aare Crown,” a special crown weighing 100 kg and made of 151 items, worn by Ooni only during the festival.

Thousands of people of Yoruba race from various communities in Nigeria and Diaspora stormed Ile-Ife to celebrate the festival.

The Awise of Ife, who came from Jamaica for the festival, Mr Amlak Atah, stressed the need for Nigerians to preserve their culture and traditional heritage.

Atah encouraged Yorubas to stand by tradition because that tradition was the only thing that could lead indigenes to great achievements in life.

He urged the Yoruba race to gear up to the challenges facing their heritage and try all possible means to protect their cultural beliefs and values from extinction.

He admonished all and sundry to jointly embrace the tradition of their forebears, repackage and export it.

In the same vein, Vice-President for Yeyemolu the Lion Society, Alhaja Ramat Ologundudu, said that Olojo Festival signified the day the world was created.

Ologundudu applauded Ooni for promoting the culture and appealed to Nigerians, especially people from Ile-Ife, to support Oba Ogunwusi to take the Yoruba race to higher ground.

She admonished all and sundry to cooperate with their traditional ruler to promote and preserve the culture of the Yoruba race.

NAN reports that on Ooni’s procession to Oke-Mogun were Ife chiefs, priests, members of Oodua People’s Congress, indigenes as well as tourists from different parts of the world.

MEANWHILE, Governor Adegboyega Oyetola of Osun has said that his administration would soon build a Yoruba Museum of global standard in Ile-Ife.

Oyetola made this known on Saturday in Ile-Ife at the Grand-Finale of the 2021 edition of the Olojo festival.

He promised total commitment to the promotion of Yoruba cultural heritage to engender economic prosperity.

The governor explained that documents of the land allocated for the proposed project had been handed over to the state government by the authorities of the Obafemi Awolowo University, Ile-Ife.

According to him, the project is to further accord Ile-Ife its rightful status as the cradle of the Yoruba race.

The governor, who was represented by his Deputy, Mr Benedict Alabi, said that the project when completed, would attract tourists to the ancient city.

He noted that this year’s Olojo festival coincided with the 30th anniversary of the creation of the state, and enjoined all to leverage on the festival to build a stronger, safer, better and more prosperous Osun.

The governor thanked the Ooni of Ife, Oba Adeyeye Ogunwusi, Ojaja 11, for his commitment and for interfacing with the ancestors to perform all rites for the benefit of the black race in particular, and mankind in general.

He reiterated his administration’s resolve to continually promote cultural heritage across the state for economic prosperity, especially among the youths.

“Our administration strongly believes that the economy could be repositioned through cultural tourism that will create wealth and jobs and also preserve our cultural heritage.

“We shall continue to offer necessary moral and financial support to efforts that will protect the people, provide an enabling environment for prosperity, and secure Osun.

“As we celebrate this year’s edition of the festival, I enjoin all and sundry to intensify efforts to preserve our cultural heritage, entrench peaceful-co-existence, eschew political bitterness and always be our brothers’ keepers,” he said.

He reminded the people of the deadly COVID-19, especially the Delta variant currently ravaging the world, and advised them to observe the protocols and get vaccinated to avoid being infected.(NAN)