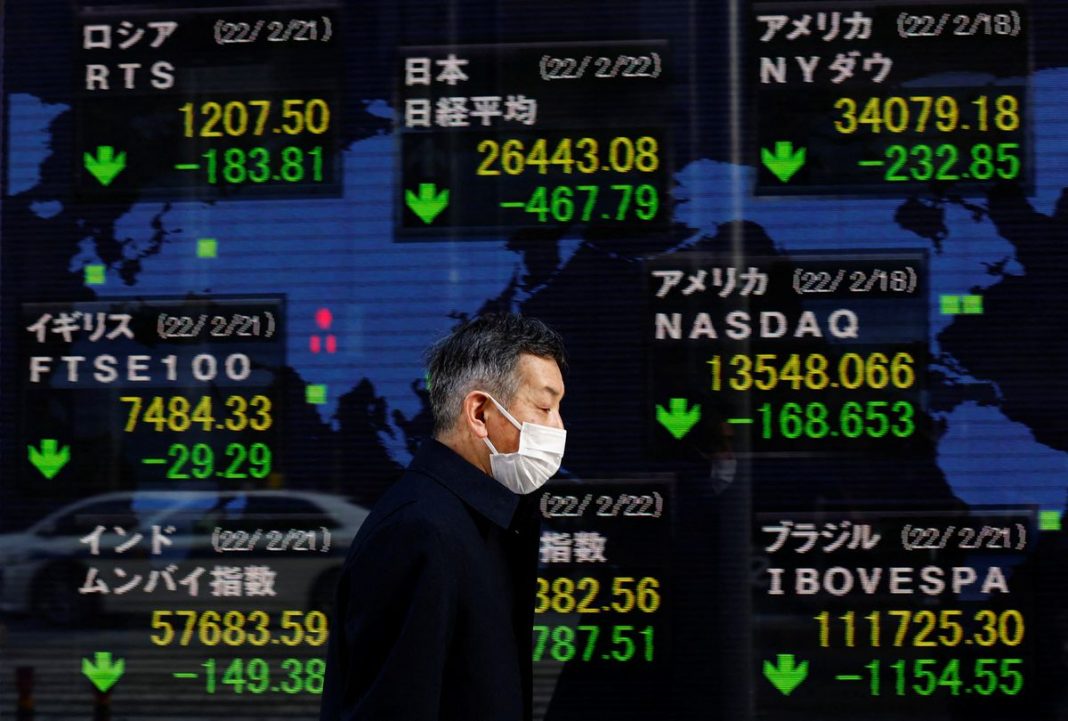 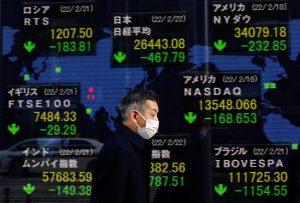 Shortly after President Vladimir Putin said he had authorised what he called a special military operation, explosions could be heard in the pre-dawn quiet of the Ukrainian capital of Kyiv and the Ukraine government accused Moscow of launching a full-scale invasion.

The United States and its allies will impose “severe sanctions” on Russia after the attacks, U.S. President Joe Biden said.

The equities rout in Asia looked set to continue in Europe and the United States, with a sharp jump in commodity prices adding to worries about inflation and risks to economic growth.

The Euro Stoxx 50 futures and German DAX futures were down more than 3.5% in early deals, while FTSE futures were 2% lower.

Closing down at least 20% from its Nov. 19 record high close of 16,057.437 points would confirm the Nasdaq has been in a bear market, according to a widely used definition. That would mark its first bear market since 2020, when the coronavirus outbreak crushed global financial markets.

The Moscow Exchange announced a suspension of all trading on Thursday.

“The market was always trying to judge if (Russia) would stop at Donbass, and it looks pretty clear that they are moving toward Kyiv, which was always one of the worst case scenarios, because we now have a long night ahead of us trying to understand how bad this gets, and what sanctions get put up, because there has to be a fresh round of sanctions now against Putin and the Russian government,” said Chris Weston, head of research at Pepperstone.

“That’s where the worst case, or the bear case scenario is for markets, and that’s what we’re seeing. There are no buyers here for risk, and there are a lot of sellers out there, so this market is getting hit very hard.”

Asset markets have seen a sharp increase in volatility over the deepening crisis, with the Cboe Volatility Index, known as Wall Street’s fear gauge, up more than 55% over the past nine days. (.VIX)

Brent crude futures , which seesawed between sharp rises and falls on Wednesday, jumped more than 3.5% to shoot past $100 a barrel on Thursday for the first time since September 2014.

Spot gold jumped more than 1.7% to hit its highest level since early January 2021.

The deepening selloff in equities came after U.S. stocks already took a beating on Wednesday, with the Dow Jones Industrial Average (.DJI) down 1.38% to barely above the level that would have confirmed a correction. The S&P 500 (.SPX), which confirmed a correction a day earlier, lost 1.84% to 4,225.5.

Investors have also been grappling with the prospect of imminent policy tightening by the U.S. Federal Reserve aimed at combating surging inflation, which NAB analysts say could be exacerbated by a commodities supply shock.

While expectations of an aggressive 50-basis-point hike at the Fed’s March meeting have eased, Fed funds futures continue to point to at least six rate hikes this year. FEDWATCH

The global flight to safety boosted the dollar, which jumped more than half a percent a basket of other major trading partners to 96.715.

The Russian rouble turned violently lower after posting small gains early in the session. It was last down as much as 5.77% on top of a 3% slump against the dollar on Wednesday.

The sell-off spread to cryptocurrency markets, pushing bitcoin below $35,000 for the first time in a month.

“Markets are now more adequately pricing in the risk of something horrific happening. That combined with the uncertainty is a horrible environment to be in. No one wants risk exposure when that’s floating around,” said Rob Carnell, head of Asia Pacific research at ING.