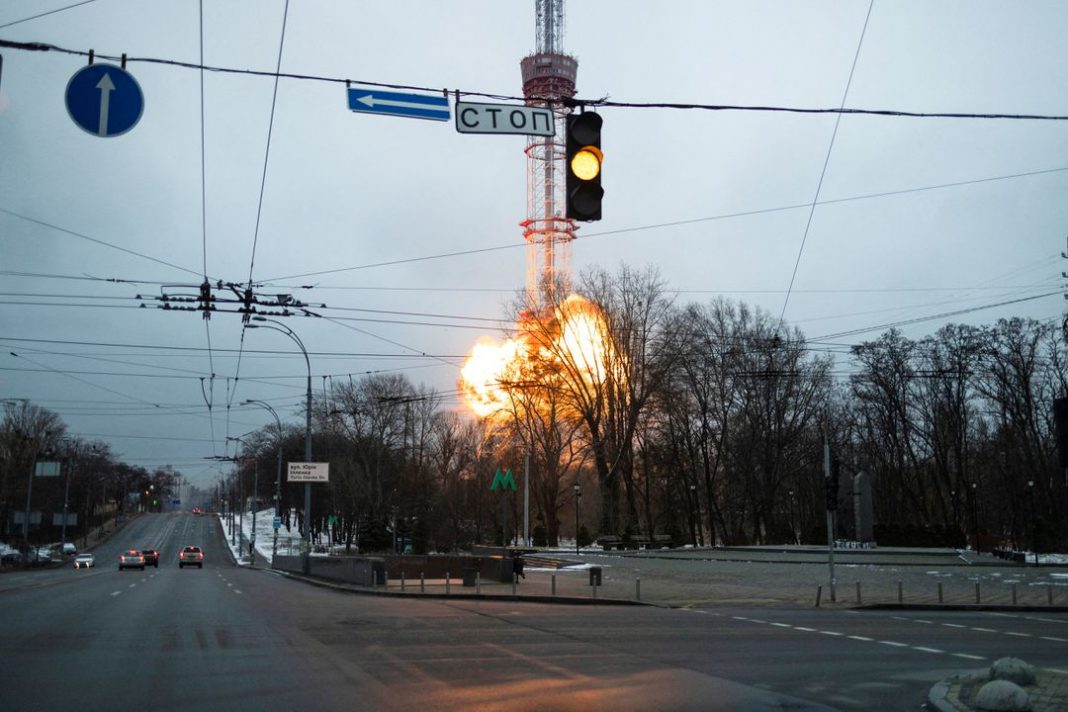 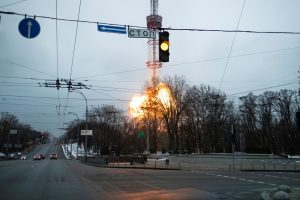 Russia warned Kyiv residents to flee their homes on Tuesday and rained rockets on the city of Kharkiv as Russian commanders intensified their bombardment of Ukrainian urban areas in a shift of tactics after their six-day assault stalled.

A U.S. official said a miles-long armoured column bearing down on Kyiv had not made any advances on the capital in the past 24 hours, frozen in place by logistics problems, short on fuel and food, and perhaps pausing to reassess tactics.

Russia’s defence ministry said it was planning to strike targets in Kyiv used by Ukraine’s security service. It warned residents near such sites to evacuate their homes, while giving no information about where in the city of three million people those targets were located.

Kyiv’s mayor published a video showing the moment when a TV antennae in the city was engulfed in flames, apparently hit by a rocket, killing five people. Earlier, Russia’s defence ministry said it would strike communications sites in Kyiv it said were being used for “information attacks”, TASS news agency reported.

But nearly a week since Russian troops poured over the border, they have not captured a single major Ukrainian city after running into far fiercer resistance than they expected.

Michael Kofman, an expert on the Russian military at Washington DC’s Wilson Center, tweeted: “Looking at the Russian operation so far, they’re having tremendous problems with logistics and communications. The whole effort seems shambolic.”

Many Western military analysts fear that Russia will now fall back on tactics which call for crushing bombardment of built-up areas beforetrying to enter them.

A U.S. official, speaking on condition of anonymity, sai

“One reason why things appear to be stalled north of Kyiv is that the Russians themselves are regrouping and rethinking and trying to adjust to the challenges that they’ve have.

The Russians have been surprised not only by the scale of Ukrainian resistance but also by poor morale among their own forces, some of whom surrendered without a fight, the U.S. official sai

Russia’s TASS news agency reported new peace talks would be held on Wednesday. A first round of talks between Russian and Ukrainian officials on Monday at the Belarus border failed to reach a breakthrough

In the south, Russia claimed to have completely encircled Ukraine’s Azov Sea coast. If confirmed, that would mean Russian forces invading from Crimea had joined up with separatists in the east and had cut off Ukraine’s main eastern port, Mariupol.s.gh.s.d.d.”d:

“For the enemy, Kyiv is the key target,” Zelenskiy, who has remained in the capital rallying Ukrainians, said in a message overnight. “We will neutralise them all.”

Some Kyiv residents have been sheltering in underground metro stations at night. There are long lines for fuel and some products are running out in shops, but by day there is a semblance of ordinary life on the streets.

In an emotional address to the European Parliament by video link on Tuesday, a day after he signed an official request to join the European Union, Zelenskiy urged the bloc to prove that it sided with Ukraine.

Foreign Minister Sergei Lavrov told a Geneva disarmament meeting via video link that Ukraine had been seeking nuclear weapons. More than 100 diplomats walked out of the hall in protest as his speech began.

In an intelligence update, Britain’s defence ministry said a shift in Russian tactics puts civilians in danger: “The use of heavy artillery in densely populated urban areas greatly increases the risk of civilian casualties.”

Human rights groups and Ukraine’s ambassador to the United States have accused Russia of using cluster bombs and vacuum bombs, weapons condemned by many organisations.

Ukraine’s general staff said Russian losses included 5,710 personnel, 29 destroyed and damaged aircraft and 198 tanks, all figures that could not be verified. Russia has given no full account of its battlefield losses.

Russia faces near total international isolation, with even ally China staying comparatively quiet over his decision to launch what he called a “special military operation” to disarm Ukraine and capture “neo-Nazis and drug addicts”.

Most effective among the sanctions so far have been those on Russia’s central bank that prevent it from using its $630 billion foreign reserve war chest to prop up the rouble. The currency weakened to 100 against the dollar in Moscow trade on Tuesday following an earlier modest rebound after hitting a record low on Monday.

Russia announced a ban on Tuesday on foreign companies selling assets to try to halt the flight of Western companies abandoning their Russian ties.

More than 660,000 people, mostly women and children, have fled Ukraine to neighbouring countries such as Poland and Romania, the U.N. refugee agency said.

At the Hungarian border crossing Tiszabecs, a mother cradled a baby in her arms after a four-day drive from Kyiv.

“I saw war, I saw rockets,” said her older son Ivan, 15, who looked exhausted after the journey. His father had stayed behind to fight.